I bumped into the work of David Maisel thanks to the exhibition called Subverted, in the Ivorypress art gallery in Madrid (until 14th April). Wonderful big photographs, many of them related to cartography and map making.

In David Maisel’s website can be read: “Maisel’s aerial images of environmentally impacted sites explore the aesthetics and politics of open pit mines, clear-cut forests, and zones of water reclamation, framing the issues of contemporary landscape with equal measures of documentation and metaphor.”

I strongly recommend to have a look to these Mathematical Mountains discovered in this webpage,  But Does it Float. About them, their creator, Steven Brunton explains:

These images are excerpts from the bifurcation diagrams of various one-dimensional maps (…). Each of these dynamical systems model various physical phenomena in the real world. For example, the logistic map is a crude model of population dynamics with reproduction and limited resources, and it is often used as an example of the period-doubling route to chaos. Typical of chaotic systems, many regions in these figures exhibit self-similarity and reflect the order that emerges outof chaos.

Recently the Guggenheim Museum in Bilbao, bought a work of Mona Hatoum, interesting Lebanese artist raised in UK. This artist is multifaceted in the sense that she has worked a variety of disciplines including installation, sculpture and performance. Maps have been widely used in different formats in many of her workpieces. Just type in Google Maps Mona Hatoum to check it out.

Lately I’ve liked these maps called “3D Cities”: Regular ordinance survey maps, their two-dimension modified by a number of geometrical cuts forming paper depressions and elevations. We do not know what they signify, although we can guess that these are probably localized spots of violence.

Here you are a video by Tate Britain, “Mona Hatoum, studio visit.”

Until February 5th, the Museo Reina Sofía of Madrid, exhibits a great collection of works by Alighiero Boetti (1940 – 1994), an Italian conceptual artist, considered to be a member of the art movement Arte Povera. Many of his pieces are maps embroidered by artisans in Afghanistan and Pakistan, as a result of a collaborative process leaving the design to the geopolitical realities of the time, and the choice of colours to the artisans responsible for the embroidery. 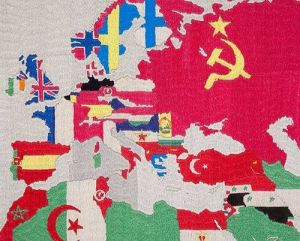 From wikipedia: “For me the work of the embroidered Mappa is the maximum of beauty. For that work I did nothing, chose nothing, in the sense that: the world is made as it is, not as I designed it, the flags are those that exist, and I did not design them; in short I did absolutely nothing; when the basic idea, the concept, emerges everything else requires no choosing.” Alighiero e Boetti, 1974

That’s why the sea is painted in red, pink or yellow; while they were doing their work, the artisans didn’t know what meant the area with no-assigned-colour. Although as it has been said by the expert in Boetti with whom I have visited the exhibition, they even didn’t know the meaning of the whole image.

Boetti was a conceptual artist, but his work is also visually rich and joyful. Being a coproduction, after Museo Reina Sofía, the exhibition will travel to the Tate Modern and Museum of Modern Art (MoMA). Highly recommended.

BBC4  is broadcasting a series called The Beauty of Maps. They have a web-site where you can have a look at it. I haven’t done that myself yet in deep;  when I try to see the videos a  this -video-is-not-available-in-your-area kind of message pops up (I am trying it from Spain, by the way). Anyway it seems very interesting, as they focus nor only in beautifuly selected Historical Maps, but also in those new ways o depicting the digital world we live in.

Magnificent Maps showcases the British Library’s unique collection of large-scale display maps, many of which have never been exhibited before, and demonstrates why maps are about far more than geography.

The exhibition will include large-scale, impressive maps from the 1400s to the present day, including the largest atlas in the world, the Klencke Atlas of 1660. It will suggest the settings in which they might originally have been seen – from the palace to the schoolroom and the home – reveal the themes that unite them, and highlight the sheer artistry that was involved in their production.

Magnificent Maps will also explore the reason behind the construction of these visually arresting works of art. Which range from maps used for indoctrination or expressions of local pride to irrefutable statements of power and illustrations of rulers’ spheres of influence.

The exhibition will be supported by a wide range of events, from talks and discussions to family events.

…reproduced by William Forsythe, is a project about visualizing choreographic  (can I say geographic?) information in new ways. Could choreography and Dance be used to research about Movement, Space and Visualization? Can Cartography and other mapping artifacts be used to help choreographers’ creativity and work? 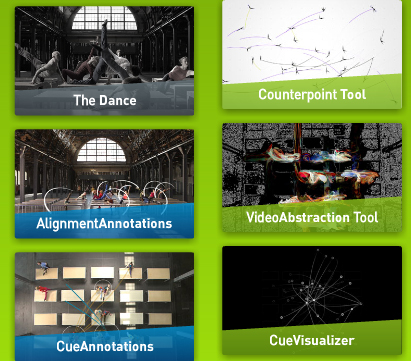 Coproduced by The Forsythe Company with the Advanced Computing Center for the Arts and Design and the Department of Dance at The Ohio State University. Synchronous Objects reveals the interlocking systems of organization in William Forsythe’s ensemble dance One Flat Thing, reproduced through a series of objects that work in harmony to explore its choreographic structures and reimagine what else they might look like. Here!

We are happy to know that this year’s Rotterdam Design Prize has gone to the Studio Joost Grootens for their work in different atlases. They do really look good. Congratulations!

At 5.00 p.m. on Sunday 29 November in the Museum Boijmans Van Beuningen pavilion, Peter van Ingen, chairman of the international panel of judges, announced the winner of the 2009 Rotterdam Design Prize.
The judges unanimously described Grootens’s work as of the moment and world class. They liked his attitude. ‘Grootens attaches great importance to the clarity of the information. His design is clearly intended to serve the reader. For Grootens, designing is not a self-seeking activity, nor does it mean promulgating a particular vision. The result is at once brilliant and functional.’